The Portsmouth Coastal Waterside Marathon was an event that I wasn’t looking forward to as much as I usually do. I wasn’t supposed to do it, it was all Victoria’s fault! I found the sights on this run quite boring the previous year and very industrial (but not in a way that is actually my thing!). Despite a very friendly atmosphere and doing the run with Dorota, overall I found it quite dull.

However whilst running the Meon Valley Marathon with Victoria last year, she casually mentioned beating my overall marathon PB (5:16:02) which was set in 2015 in Portsmouth. Well… I didn’t manage to beat my PB at the Meon Valley that day as the course is much more hilly, but I reduced my course time by 20 minutes. This is how the seed was planted. I wondered, if I reduced my time on a hilly course by that much, what could I achieve on the flat course in Portsmouth? So I signed up.

Victoria kindly agreed to pace me for my first sub 5h marathon. Boom! There was no turning back now.

Victoria’s friend Paul, decided to join us too. Paul jokingly said that we could maybe try pacing me for 4:30:00. I was getting very excited but Victoria was reasonable and said that we should just aim for under 5h, and if that was 4:59:59, then so be it. I agreed 😀

Apparently a marathon doesn’t count if it takes you over 5h to finish, following that logic, none of the 23 marathons I completed so far counted! I have huge respect for everyone who runs, running is hard work. It doesn’t matter to me how far or how fast you go, you are still lapping everyone on the couch (as they say). Having done quite a few marathons now, I’ve seen people of many shapes and sizes and I can’t help but admire the slower and the bigger runners more than the winners. I guess I can relate in many ways to the efforts of slow running and it’s not always a choice or a matter of not doing enough training or not eating enough kale!

I got up early on the day of the run and Jamie gave me a lift to a petrol station on the A3 that Victoria and Paul were picking me up from. I said goodbye to Jamie and jumped in Victoria’s car. To Portsmouth we go!

Or do we? There was something wrong with the car! A light kept flashing showing an engine fault, but it had just passed the MOT and it didn’t make sense. Did this mean that all my pre-marathon stressing was wasted? Fortunately not, following IT support guidelines we went for ‘have you tried turning it off and back on again?’ and eventually the fault light switched off and we were able to carry on.

We got to Portsmouth but we didn’t have much time. Jenny was there at registration which was a good omen, I got a hug and a kiss and was ready to go. 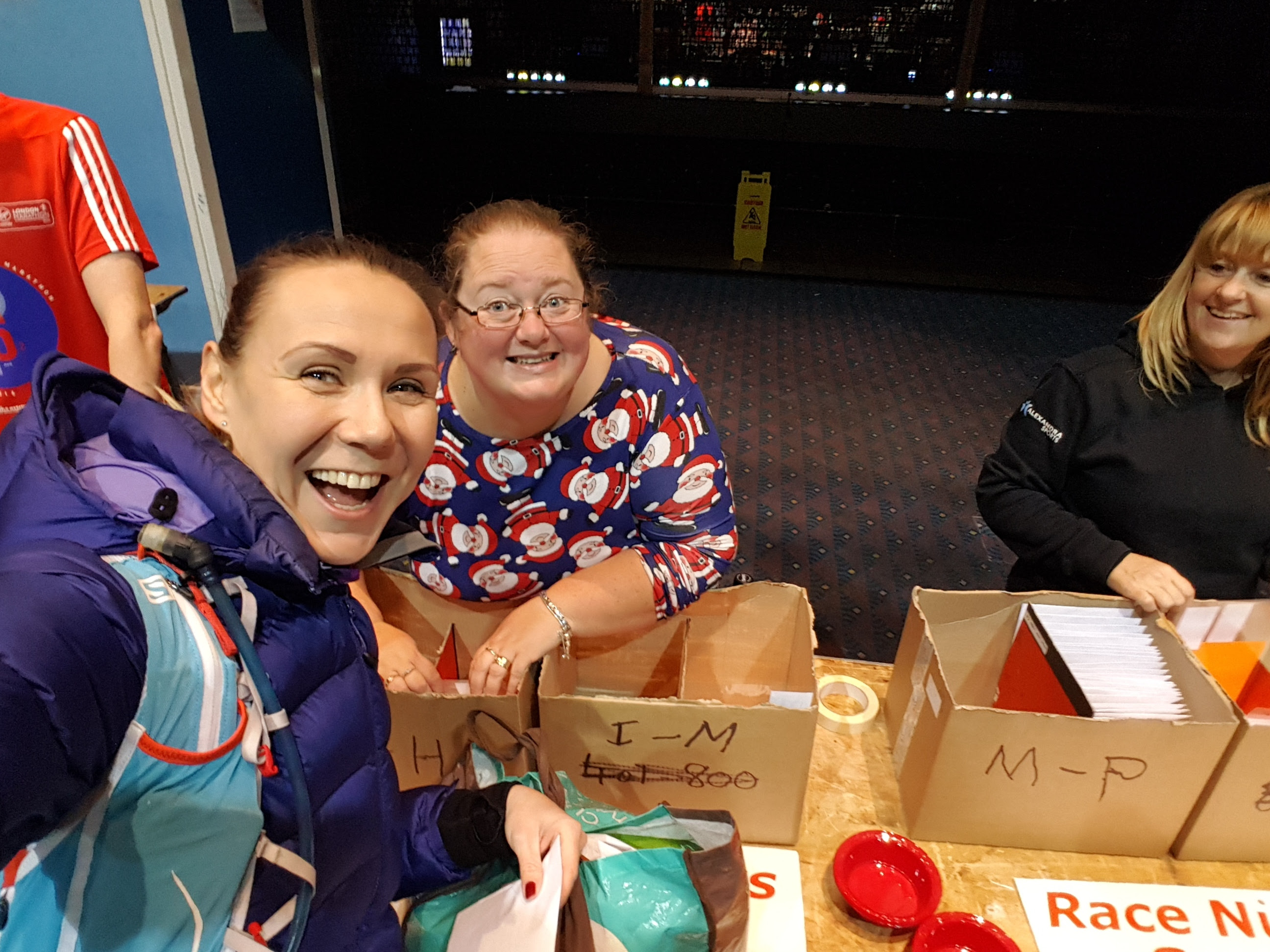 The race had started before we got to the start line, but that was fine as the event was chip timed. 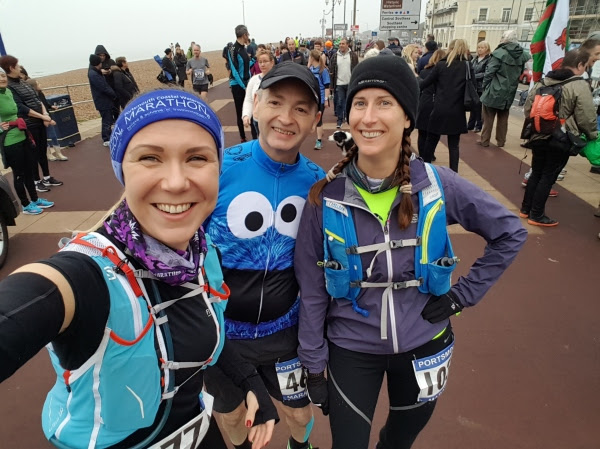 I was meant to meet up with Tara but she was long gone by the time we started running.

The beginning of the race is on the promenade by the seafront, flat and easy, so I set of too fast (this is always the case, I get overexcited) but that was quickly corrected by my pacers. There was no real plan for this race apart from the overall goal of under 5h.

We got to the beach and had to queue as everyone took their time coming down from the bank (it’s not easy), this was a perfect opportunity for a picture: 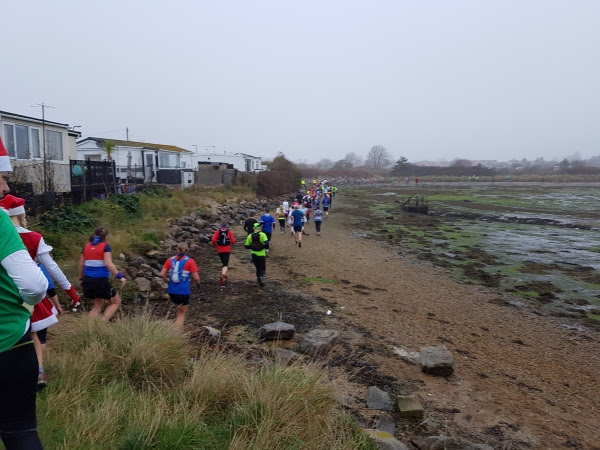 In order to ensure my PB I had to limit the amount of pictures I took. It tends to be nearly 100 per marathon, twice as many if it’s especially picturesque! That day I was aiming for 5, most of which would be after crossing the finish line.

After the beach we were back on the road and soon at the first aid station.

I took a lot of comfort in not having to eat, as I was using Tailwind (thank you Anthony) as my nutrition. I really learned to appreciate it after all the runs I had used it for. I enjoy the peace of mind that I’m getting enough calories, minerals and salts by just drinking throughout a race.

This meant that I didn’t even have to stop for food. Nothing can stop me now (I’m being sarcastic here!). Running a lot of challenging trail marathons means that you get to walk a lot. You definitely walk all the hills and… you start looking forward to them. A hill means a break. No hill means no break and Portsmouth  is not hilly.

Being used to taking hilly walking breaks on my marathons, running non-stop presented itself as an obvious challenge. OK, even on a flat marathon (the Dark Phoenix) I would sometimes walk but that day in Portsmouth I felt like I couldn’t disappoint my pacers!

It quickly became clear that Victoria and Paul had very different approach to motivation:

Paul wanted to keep going without stopping and consistently getting towards my target.

Victoria was telling me that there was no pressure, that I could do it and that all was going to be OK.

Unfortunately my brain only works in one way: tell me I can’t do or have something and that thing will be all I want, preferably now 😉 Think cake and you will have a perfect example.

In this case it was walking and when Paul said ‘try and carry on running’, which I read as ‘you can’t do any walking’ all I wanted to do is stop and walk for a bit.

Victoria on the other hand would say that we could stop and walk whenever and as you can imagine, this had the exact opposite effect. Like saying “You can have all the cake”, I would think to myself “Nah, I don’t want any” (OK, maybe cake is not the best example 😉 )

We were sometimes running all together, other times it was me and Victoria or me and Paul. They really looked after me and didn’t want to leave me alone.

I was struggling more and more and the ‘not walking game’ was really getting to me and not just mentally, my legs were getting very achy.

Eventually we got to the half way/turn around point and I said to Victoria that I will use the facilities and ‘have a little cry’. I didn’t want to worry her and I knew that there really was no pressure that they both were trying to help me through it the best they could but I was really struggling. Thinking about it, I’d never actually ran a continuous marathon before (!)

“Focus! Think about the positives, you are half way through! You are closer with every step” I told myself. Maybe a picture will help? 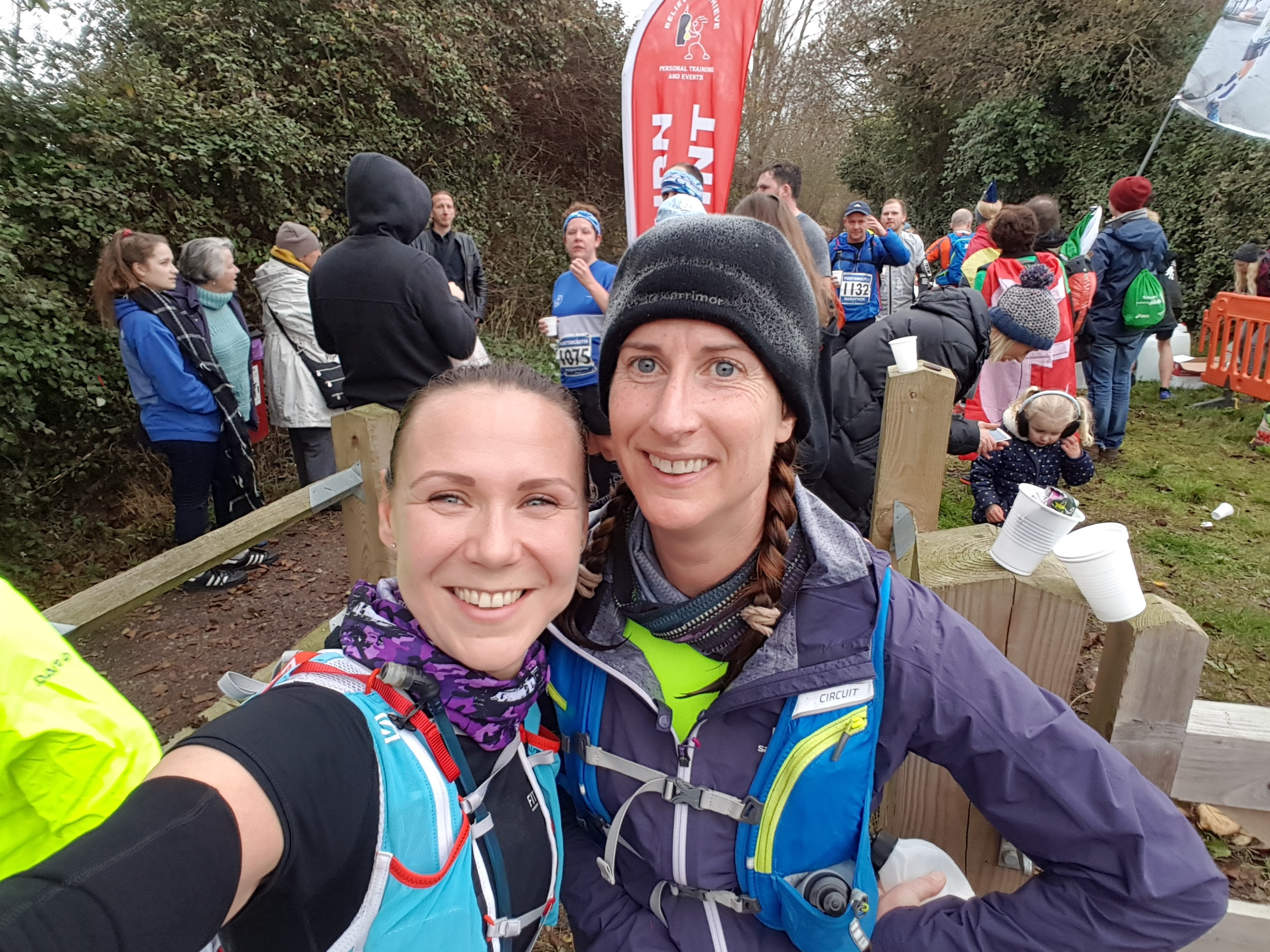 At the first aid station on the way back I had to squat to stretch my legs, they were aching and I was feeling miserable. Victoria went ahead and Paul was waiting for me and then I spotted mulled wine 😀

I had some when my pacers weren’t looking, which gave me a very childish sense of ‘Result!’

Paul and I carried on following Victoria. The next section was by the road. Even though it was a bit merky, we were fortunate enough to have no wind from the sea.

After 19 miles it finally happened. I broke! My breathing went mental and all the thoughts of disappointing my pacers, being grumpy and generally too slow for this whole marathon thing, crammed in my head and I burst into tears! I was standing there sobbing and I couldn’t stop. I remembered what my breathing physio told me: “If in doubt, breathe out”, and I was trying to calm myself down.

Paul noticed that I stopped and turned around, I was expecting a hug but what I got actually worked better. Paul touched my shoulder and said: “You’re all right mate?”. Was I all right? No, not really. Did it make me laugh? Yes, on the inside at first, on the outside I was only just managing to control the weeping! I managed however to pull myself together and started running again. Paul was trying to convince me to walk for a bit but it was easier to carry on running (paradoxically!). He commented on how stubborn I was and we carried on 🙂

We caught up with Victoria by the beach and Paul went ahead (he’s quite speedy on pebbles) and we walked. From then on we were mostly together, we didn’t have far to go.

My legs were really hurting but at that point walking would have been worse than running!

Paul was struggling with an injury and that was the only reason why he was running slowly with us. He was hurting as well as there’s nothing worse than running at somebody else’s pace!

Victoria went ahead once again and when Paul and I finally closed the gap between us, we were the last people who were allowed to go through the beach before the tide. You know when people say, it’s the little things? This had made my day! Going on the beach before the tide came in was my small victory. But then because the tide was already along way in, we had to scramble over the rocks, at least Victoria and I did. Paul made a sensible decision of going in the sea. This broke Victoria, she really didn’t appreciate going on all fours, trying not to twist an ankle between the stones. I on the other hand quite enjoyed it, mainly because it was a break from running!

When we managed to get to the sea front, it was a straight road home. I suddenly got my second wind and was running quite strongly, I also knew that I would finish under 5h.

We only had two mile markers to go, 25 and 26, each of the mile markers on this course was dedicated to someone who had died in 2016, the final two were Prince and David Bowie.

We were nearly there, when suddenly we got a waft from one of the cafes or fish and chip shops… and it made Victoria sick! I was really worried that she wasn’t well… and no, I have no pictures of this incident and yes, Paul and I waited for her.

Victoria reassured us that she was OK and we carried on to the finish line. We crossed together and were very happy, joking about Victoria being sick of me by the end of the race 😀 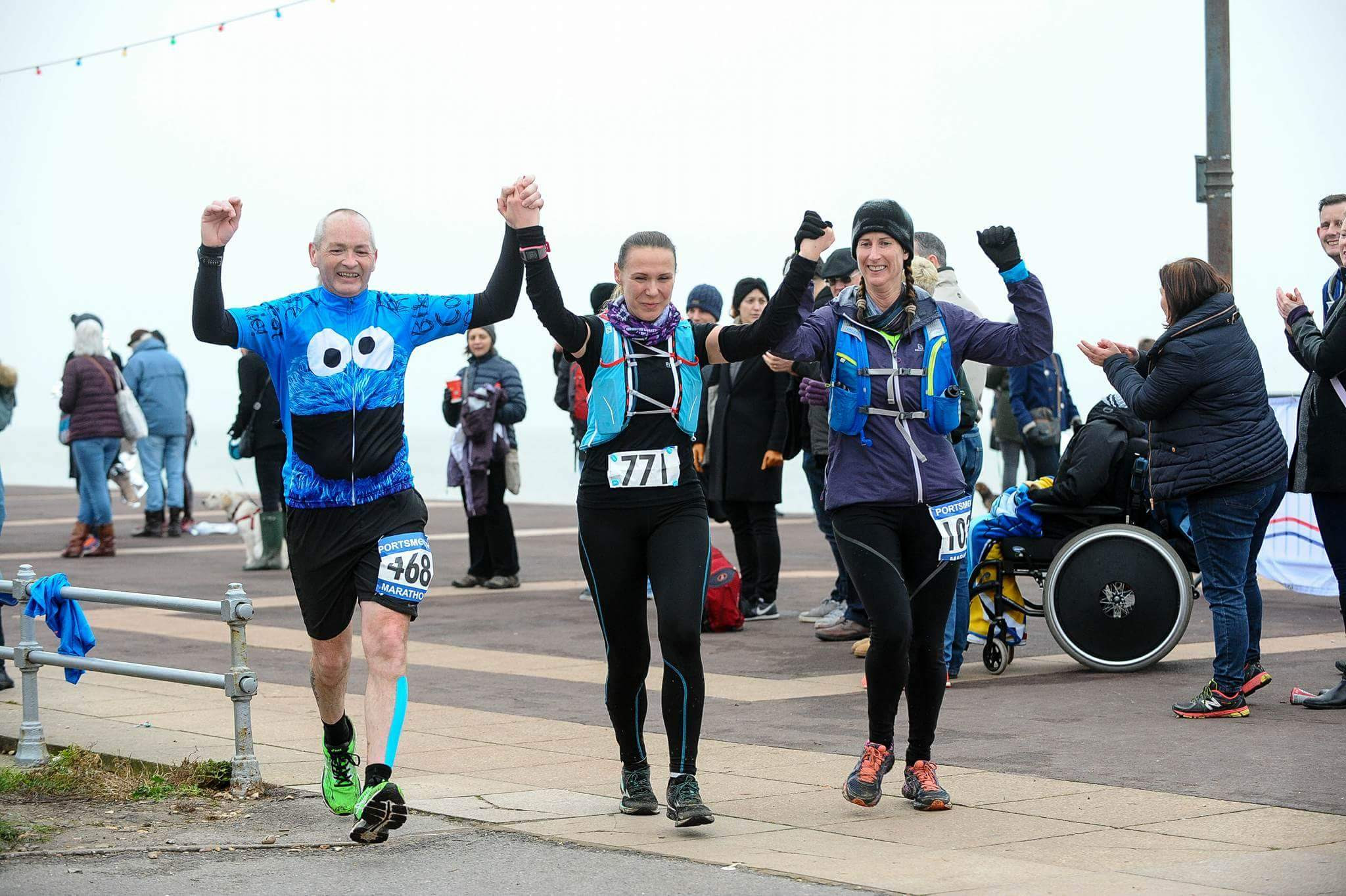 We got our medals (they are nearly 0.5kg) and quite amazing goodie bags and then took loads of pictures. This event is very well organised, the marshals are lovely and helpful and the goodie bags are great. However the route itself is not pretty and with a strong wind from the sea it can be a very tough event. 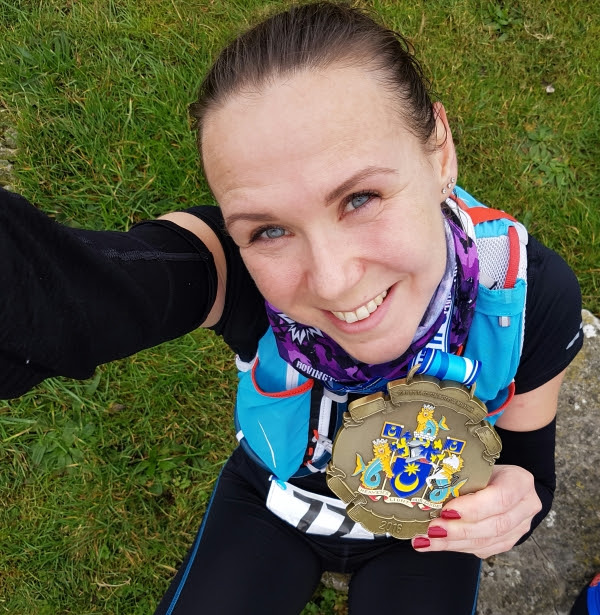 A huge thank you to my two pacers, you were both fantastic, I really needed both a carrot and a stick as motivation this time. I’m really pleased that you helped me make sub 5 happen despite car problems, crying and throwing up!

Can’t wait to do it again!